I first learned about Montessori when my sister’s children started going to Montessori, about 22 years ago. However it was a number of years later that I started working in Montessori. I started with 3-6 children but now I have been teaching 6-9 year olds for several years. 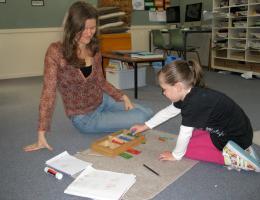 It is difficult to recall what first caught my interest in Montessori, maybe it was watching my nieces and nephews being independent at home. What I do remember is that whenever I was doing any training I wished there had been the opportunity for me to have this type of schooling when I grew up. Maybe I would have been better at maths and more interested in school in general.

I have a Montessori 3-6 diploma from London Montessori Centre and worked for four years in a Montessori preschool. I then spent three years at university getting my state primary qualifications with the intention of teaching in a Montessori classroom when I graduated.  In 2003 and 2004 I travelled to New York and completed an American Montessori Society Diploma for 6-9 year olds and I have taught this age group for the last seven years.

It is fantastic that children can learn independently and be so collaborative together.