Over 650 votes were cast in the inaugural Dr Nicola Chisnall Memorial Award. The overall winner of for 2014 was Wā Ora Montessori School from Lower Hutt.

The award was made by Dave Stott at the MANZ Conference dinner in New Plymouth on September 6th, 2014, to Krista Kerr, who accepted on behalf of Wā Ora Montessori School. 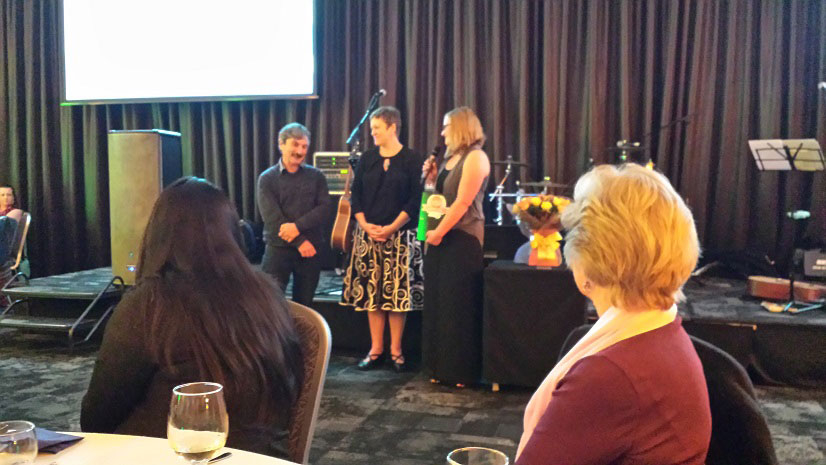 Congratulations to Kerry Pratchett and Cathy Wilson from Wa Ora Montessori School for coordinating the school’s entry to the award.

This message from Jenny Stott, Nicky’s daughter, was read at the presentation of the award.

“Congratulations to the four nominees in the inaugural Dr Nicola Chisnall Memorial Award.  Each of you has undertaken and achieved inspiring projects that focus on areas Mum was particularly passionate about – supporting children in their immediate and wider communities and working with those communities to open pathways for children to teach and inspire the people around them.

As you will all know, and as Mum worked tirelessly to promote, children have a lot to teach us.  Mum believed that the Montessori framework supports peace and social justice by allowing children to think for themselves and the importance it places on being part of their wider community.  It promotes independence and the pursuit of subjects they are truly passionate about. It also teaches children that their actions and the actions of others impact the people and environment around them.

Each of your projects shows how you have taken forward this philosophy of working with your local and wider communities to offer children an environment that inspires their learning and promotes a sense of belonging, whether that is being welcomed from one classroom to another; developing and being part of the environment outside the classroom; or developing relationships and partnerships with other local groups to support the children in your schools, all of these projects focus on preparing your children to live in and be part of their community and to teach and inspire those around them.

I am very happy to see that the philosophy Mum worked so tirelessly to promote is alive and well in Aotearoa’s Montessori movement and that Mum’s memory is being honoured by continuing to promote projects that reflect that.  Good luck and congratulations again on your inspiring projects”.

We encourage Montessori centres, schools and students to start thinking about entering this annual award in 2015.

Firstly, many thanks to the people who entered the inaugural award. It takes time to tell a story and put together ideas and evidence. And courage to be the first to enter a new award.

The four entries can be downloaded below.

Download the Entries in the 2014 Dr Nicola Chisnall Memorial Award